"Reinventing Indulgence" One meal at a time!

Before the day and age of Pinterest, one would simply rip a recipe out of a magazine and go make it. My Mom still likes to do this. So there we were driving upstate and discussing the ingredients. It’s a good thing too because after the pumpkin picking, we headed into the Woodstock supermarket without, of course, the recipe and ingredient list. We lost it – for the record, this is why Pinterest is better lol. We winged it. I believe I had made them before except with wild rice. The couscous came out delicious. We stuffed them in the peppers and had a few light yet satisfying meals. 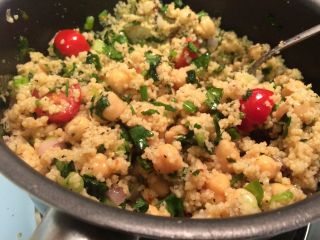 We cooked the couscous at about a 1.5 : 1 ratio of liquid to grain and then simply mixed in the spices, scallions, finely chopped cilantro and chick peas. It was already delicious right here. Then we stuffed it into the bell peppers and baked them. Afterwards online, I noticed that some people keep the tops to the bell peppers to put on after they are baked for a photo. I missed that photo opt. This is a great mini meal- healthy, tasty and fulfilling.

Yes I confess, that is cheese on the left side. My Mom and I cooked this dish together. She supports my vegan lifestyle and helps with ideas. I can only push my values so far. I’m not going to argue with the one who brought me into this world lol. I wouldn’t win anyway. Cheese it was (on her side) and when I make it again, I will be prepared to sneak in the vegan cheese. Shhh.